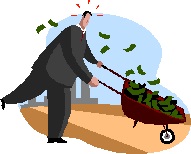 This may be the best of all possible times to take advantage of the Roth IRA or Roth 401(k). These special retirement accounts let savers put away money after it has been taxed, which means that withdrawals are tax free. Contributions to a traditional IRA or 401(k) are made with pre-tax dollars, explains CNBC in the article “Why now might be a good time to save in a Roth 401(k) or Roth IRA” and taxes are paid on withdrawals made during retirement. The taxes paid on withdrawals are hoped to be lower because retirement income is usually lower than working income. However, with today’s historically low tax rates, there’s only one way for taxes to go—up—and that might mean that withdrawals from traditional accounts could actually be taxed higher than they are now.

The Tax Cuts and Jobs Act reduced income tax rates for individuals. The top marginal income tax rates for individuals dipped from 39.6% to 37%. However, the national budget deficit has grown to nearly $1 trillion in 2019, largely because of spending increases and big reductions in revenue because of the changes to the tax law. How’s this for size: the U.S. budget deficit is larger, as a share of its economy, than that of three dozen—yes, 36—other developed countries in the Organization for Economic Co-operation and Development.

Many experts think that this level is unsustainable and will have to lead to tax increases in the near future to bring in more revenues. One advisor noted that there’s a “giant economic storm that’s brewing,” and says there will be pressure to raise taxes.

Roth accounts would shelter savers from increases to the income tax rate. This won’t protect savers from non-income tax increases, such as a consumption tax or a wealth tax.

Nearly 18% of U.S. households have a Roth IRA, totaling $800 billion in assets nationally. By comparison, 26% of household have a traditional IRA, with a total value of $7.5 trillion. More companies are offering employees Roth 401(k)s to their workers.

Unless lawmakers extend the Tax Cuts and Jobs Act, income-tax rates for individuals are scheduled to increase to pre-tax law levels in 2026. Will lawmakers extend them? It is not likely, given the deficit levels. Therefore, saving in a Roth now could be a smart move.

Another viewpoint is that trying to outsmart the tax laws won’t pay off at all, and that Congress might decide to tax Roth accounts, if the government gets desperate for revenue.

That school of thought says that savers should divide their retirement savings in a 50/50 split and put the money in both Roth and traditional retirement accounts. The goal is to “tax-diversify,” just as you diversify investments.