« Add Fourth Leg to Chair and Strengthen Retirement | Main | What If the Children are Not Independent – Yet? » 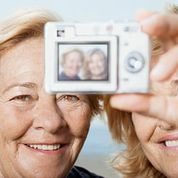 Because the risk of running out of funds is higher for women, some advisors favor a more conservative approach, with lower expected returns on an investment portfolio. Add to that, the fact that women provide much of the care-giving to others and afterwards end up having to look after themselves. Perhaps that’s why so many occupants of nursing homes are women.